A Letter to Tsumugi
A warm, welcoming smile accompanied by a gentle wave greeted me cordially as I was scrolling nonchalantly through my Instagram feed on a dull summer day. Little did I know that in that very moment, my entire life would change for the better. After questioning friends and doing my own research, I found out that he was Tsumugi Aoba from Ensemble Stars, a game that I had made several attempts to get into, but had unfortunately never encountered a character that particularly stood out to me-that is, until I found out Tsumugi existed. I had already been intrigued by his appearance in that first image I encountered, but when I saw his regular look, it somewhat sealed the deal. He beckoned to me with a feeling of warmth and companionship that I had been starved of for so long. I had never laid my eyes on a character with appearance as unique as his, with his dark, unkempt hair and glasses, accompanied spectacularly by a pair of soft yet melancholic eyes. Predictably, I dove into his story and every bit of information I could gather about him throughout that summer, while simultaneously saving up dia for his birthday scouts. In the next couple years, my dia would be frequently used on this boy-be it successfully in instances including his teddy bear 4* Gondola 5*, first few limited cards, and ranking 45th in the Wonder Game event earlier this year, or in more difficult situations such as acquiring his 4th anniversary lim and devil 3*. Regardless, every diamond and dollar spent has been worth it. Tsumugi not only appeals to me aesthetically, but also personally. He was raised in a questionable environment, and throughout his life has made equally questionable decisions. His odd upbringing certainly contributed to his dependent, compliant personality displayed in his second year. He was lost and desperate to cling onto a charismatic figure in order to find a sense of purpose in serving them. Tsumugi felt obliged to mold his personality and attitude based on the commands and desires of those he looked up to. He was a malleable lump of clay in the hands of a tyrant, which resulted in his cruel actions towards certain peers. However, when he was thrown away and no longer considered useful, he realized exactly what he'd done. He became aware of his own actions, along with the fact that he must still be held accountable for them. With the help of his newfound self awareness and genuine friendship within his unit, he has dedicated himself to personal growth and is genuinely sorry for what he did in the past. His commitment to his own positive development is extremely admirable, but simultaneously a bit saddening. I wish he could let go of the past and understand that what's done is done and he shouldn't spend his entire life apologizing for his mistakes. This aspect is something I understand completely, and I would give anything to help Tsumugi realize that his past doesn't define him-it has only molded him into a better, stronger person. And that's why I am so in love with him. He has noticeably changed for the better. Despite his mellow, anxious demeanor, he has a somewhat nihilistic outlook on life itself, however, he continues to seek comfort in the company of others and escapism into those fantasy novels that he adores. He strives to keep spirits high and is an ultimately selfless character, loyal to the people he loves. I strive to be just as loyal to him. When I first discovered him, everything that could possibly go wrong in my life was doing just that, and I was miserable. But I met him. He took my hand and taught me that even after the worst experiences with people there can still be hope. There can still be forgiveness. Even after it seemed like the world had given up on him, he took his own life by the reins and dug himself out of that bottomless pit of self pity-and I aspire to do the same. For the past two years now, Tsumugi has continued to motivate and inspire me in every aspect of life; everything I do, I do it for him. Nothing compares to the feeling of obtaining a card of his, or seeing beautiful art depicting him, or receiving yet another little keychain of his in the mail. Tsumugi makes my heart warm, and he cures my loneliness. He truly is my emotional support anime boy, and I am always going to love him. Tsumugi, you are the love of my life, and I would give anything for you to accept and love yourself-to see yourself in the same light that I see you. I want you to realize that you are a beautiful person, inside and out, because you deserve to know that. It's the truth. I said it last year and I'll say it again; you are my bluebird of happiness, and I hope you find your own someday. I love you so much, Tsumugi. I love everything about you, from your anxious habits to your superstitious beliefs, from your skill in creating costumes to your gorgeous singing voice. You make me smile every day, and I want you to smile forever. 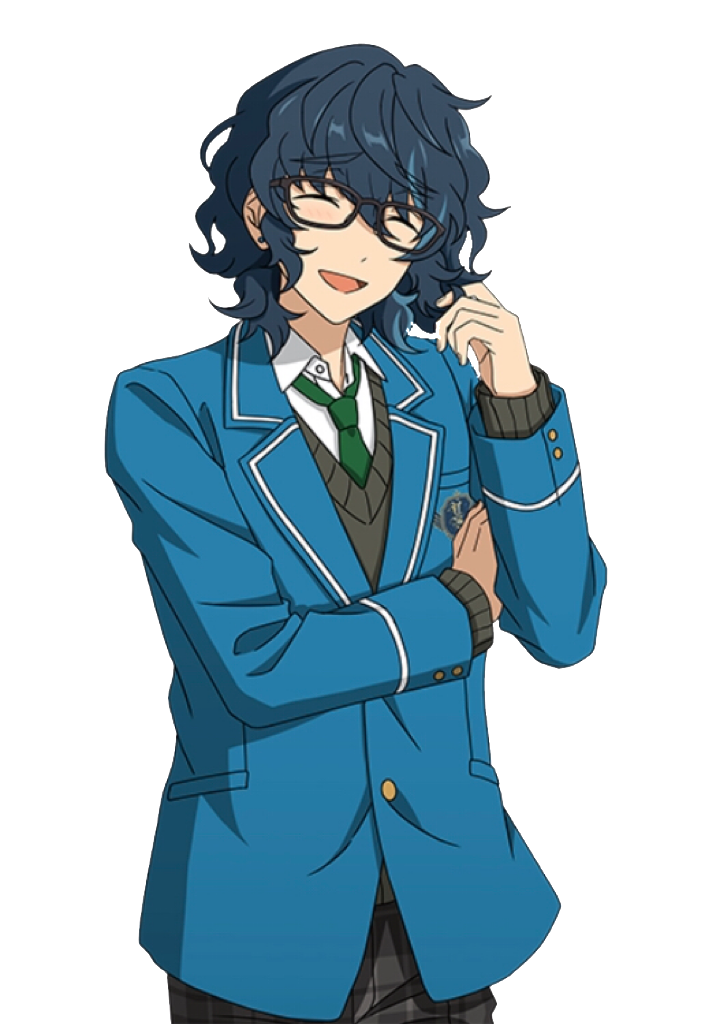